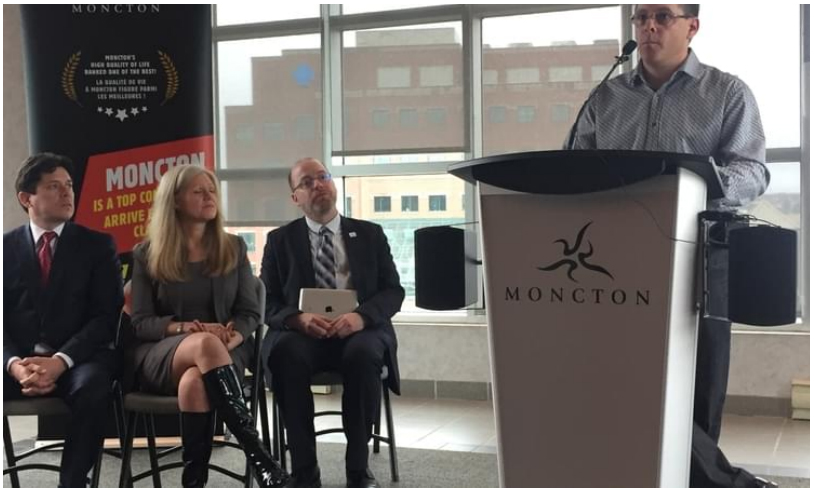 Jacques Latour, the chief technology officer with the Canadian Internet Registration Authority, announces the creation of an Internet exchange point in Moncton.

Moncton is the second city in Atlantic Canada to gain an Internet Exchange Point, which offers faster and more secure access to the web.

CIRA, which manages the '.ca' domain, is one of the organizations to spearhead the development of the Moncton IXP - Canada's 11th location - on St. George Boulevard. It will go into operation within the week and be run mostly by volunteers.

The IXP puts Moncton in with other major Canadian cities that have an exchange, such as Halifax, Toronto, Vancouver, Ottawa and Calgary.

"It's now of sufficient size, strategic location and importance [to say] that it's New Brunswick's city with an Internet exchange," said David Shipley, the director of strategic initiatives at the University of New Brunswick's Information Technology Services.

"It aligns really well with the analogy that Moncton has always had, as a hub [city].

"An IXP acts as a hub where Internet service providers and content delivery networks - such as Google and Amazon, as well as universities, cities, and others with web content - connect to each other's network infrastructure.

Instead of these organizations each relying solely on their own physical Internet infrastructure - or commercial networks - they agree to freely use each others, said Shipley.

"The better analogy is highways and toll highways," he said. "Depending on which way you route your traffic, you have different costs and, if you own the highway, you donʼt necessarily have those costs."

"When you create these interconnections, it's going to look for the most efficient way to move that data," said Shipley, meaning information moves faster.

It also increases the chances that Canadian web users keep their data in this country. Right now, information sent through the Internet by users in Moncton - from a simple web search to filling out your tax returns online - travels along networks that lead into the United States or other points around the world, said Latour.

"Say you [are in Moncton and] wanted to browse the University of Saskatchewanʼs website, " said Shipley.

"Your Internet traffic might route from your home address in Moncton to the... hub in Toronto and from Toronto it might actually go down into the States via an exchange...because there may not be as many fibre connections that run straight from Toronto across the country."

Once personal information travels south of the border to use an exchange point, it falls under that country's regulations involving surveillance.

"For example, we know that the [National Security Agency] and other groups can listen to major Internet hubs in the United States - they tap them," said Shipley. "So, if youʼre not using encrypted traffic, or if youʼre using weak encrypted traffic, they can still gather a lot of data about you."

The more exchanges that are created in Canada, the more the need to move that Internet data outside the country is reduced, he said.

The exchange also offers the City of Moncton economic advantages as it is a selling point to attract international companies and organizations that want to use the hub, as well as providing local companies access to the big companies, said Richard Dunn, an economic development officer with the city.

Join our email list to stay in the loop with Fibre Centre news and events.